as spring is in the air...it should be summer, but we cannot tell nature what to do....I made a birthday card using one of my new dies from Simonsaysstamp. One of my favourite online shops ever...

The background of the card I made ages ago using the wrinkle free distress technique by Tim Holtz. I love love love this technique. Makes you think you can watercolour like vanGogh.

So the base of the card was the background. 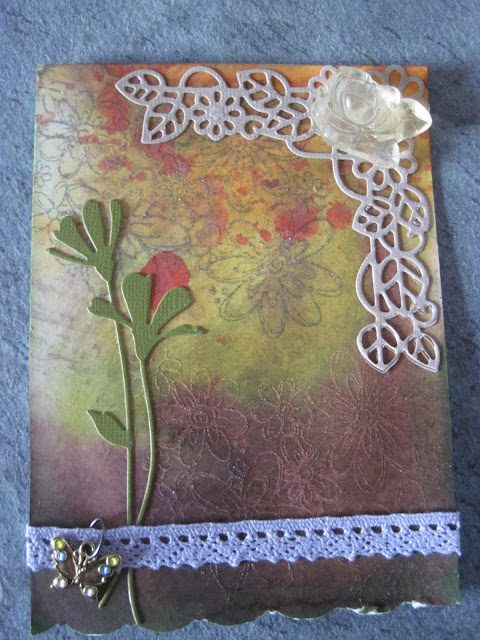 I stamped the flowery background using a stamp by Dyan Reavely in embossing ink and embossed it with tattered rose distress embossing powder. It looks darker on the light side of the card and lighter on the dark side of the card. You have got to love embossing powder! The green flower die cut is a special Simmonsaysstamp die. I saw it on a card once on the Internet and had to look for ages until I found it. It is so delicate and simple. The other die cut I have used before but is also a new addition to my collection. I like the way it looks like lace. The flower on that die cut is made using melted UTEE and a silicone mould.
The lace I stuck on there using tiny glue dots. The butterfly charm was a bit dull so I gave it a hint of colour using liquid pearls. A jump ring to stick it to the lace and then a scallop cut to the bottom edge of the card and my project was done.
Until next time, take care.
Frederique
Posted by Freddie Bubblescrap Sleijpen at 11:34 No comments: Links to this post

Thank you for tuning in again. As I have a fad at the moment for making mixed media canvasses, I decided to make one for my dad for Father's Day.

I wanted to keep it simple and yet personal. My dad has had a moustache for as long as anyone can remember so that obviously was the theme to go with. Luckily the moustache is the newest craze in the crafting world. I have stamps, die cuts, silicone moulds.......all of moustaches. So this was a no brainer.

I used a pre primed canvas. It was primed with gesso so I did not need to do that. I glued a sheet of paper stash on the canvas and let it dry. After it had dried completely I tore of the edges. 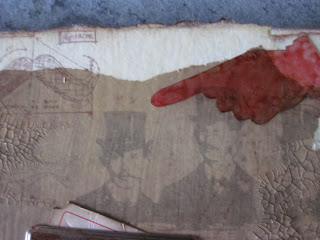 I then stamped various images in very light colours so they would make a nice subtle background.
Moustaches and of course men with a moustache. I added some die cuts I made from clear plastic packaging. I coloured them using alcohol inks.(A new addition to my crafting palette)
The embellishments on the top left corner and on the right of the canvas are made using UTEE and the melting pot and some moulds. 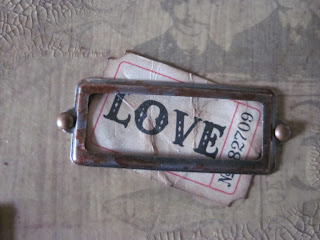 This little bookplate I stained with alcohol ink to make it look distressed and rusty. The sentiment ticket I inked with distress ink using the blending tool. Two brads hold it in place.
I placed two epoxy stickers on the whole project to break op the bare space. And also I covered some areas with Rock Candy Crackle Paint to give it some sparkle, but not too much.
The letters were covered in black UTEE and really pop.
It will be a surprise to see if, and if so, where it will hang in my parents home....
Take care and until next time...
Frederique
﻿
Posted by Freddie Bubblescrap Sleijpen at 11:16 No comments: Links to this post

canvas for my dear cousin

in this post I want to share a canvas I made for my cousin who got married not to long ago. So it is kind of a belated wedding present.

I primed the canvas with gesso to create a base. I then stuck some masks on it before I inked it with Antique Linen distress ink. Here and there I gave it a very light green hue as her favourite colour is green. On the left bottom corner I painted with white crackle paint and let that dry before I coloured the cracks with brown distress ink.

Here you see how the cracks of the crackle paint pop once they have been coloured.﻿

After that I stamped the images on the canvas using archival ink. I love the leaf stamp from Ranger by Dyan Reavely.

The letters I painted with tarnished brass crackle paint. 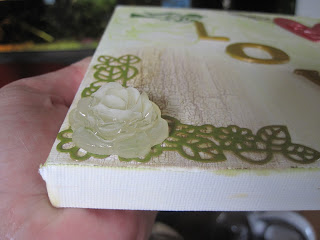 I made a leafy die cut and stuck a rose on it I made using UTEE and the melting pot. I love how the rose looks like it is made of glass...

The other die cut is one of Tim Holtz's Bigz Dies. I painted those with liquid pearls and glued it all together.

I am proud to say that it now hangs on a prominent spot in my cousins living room.

I wish the happy couple lots of love and happiness.

I have been dabbling in crafting now for a little while and wanted to try something new. So besides making cards and tags I decided to give mixed media canvasses a go.

Keep in mind this was my first attempt.

I started out with a blank canvas that was primed with gesso. I added some colour using distress inks and blending tools. Then I glued some tissue paper on it. I also used a bit of tissue tape. I cut the edges of the photo and the photo mat with craft scissors to give it a retro feel. The roses are made from paper I cut with a scallop edge and rolled them up to form the flower. The sentiment and flourishes I painted with crackle paint and glued it all together.

And voila, my first ever canvas....

I really liked doing this and I made a few more that I will post later on.

Take care and hopefully until next time.

Frederique
Posted by Freddie Bubblescrap Sleijpen at 10:34 No comments: Links to this post

Freddie Bubblescrap Sleijpen
I started crafting in the summer of 2011. I am inspired by Tim Holtz, amongst some other crafters. I mainly work with manila tags but also like to make cards, mini albums and the odd canvas.